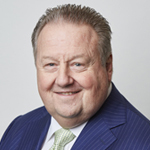 In his role as president & CEO of Forest Electric Corp., Bob Richardson’s key responsibilities are overseeing the day-to-day operations of the company and maintaining close relationships with New York City’s elite general contractors.

Through the constant cultivation of business relationships, Bob ensures a steady flow of major projects are added to Forest Electric’s portfolio each year. Bob also leads the organization’s Executive Committee. Through this role, he actively participates in strategic planning meetings with each of the department heads to keep the future direction of Forest Electric at the forefront of the committee’s agenda.

Bob has more than 43 years of experience in the electrical contracting industry and has spent the last quarter century with Forest Electric Corp.

Bob joined Forest Electric in 1978 as an estimator. In 1986, he was promoted to vice president in charge of the company’s estimating department. In this new role, Bob was responsible for overseeing the daily operations of the largely staffed estimating department. He held the position until 1996 when he became the company’s executive vice president.

In November 2006, he was named senior executive vice president, where his key responsibilities revolved around sales and new business. After 35 years of dedication, Bob was awarded the well-deserved title of president of the organization. Prior to joining Forest Electric, Bob worked as an estimator for Coyne Electric and Litemore Electric, two New York-based electrical contractors.

Bob and his wife enjoy boating and traveling. He is active in his community and is involved in various charitable organizations, among them, New York Presbyterian Hospital and St. Francis Hospital. He also serves on the Board of Directors of St. Dominick’s Golf Charities. When not wearing green for Forest, Bob is donning green at the stadium with his sons and grandson cheering on the Jets!