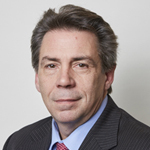 Utilizing his extensive knowledge of New York City’s building, electrical, and fire alarm codes, as well as current installation procedures, John helps his team deliver high-quality electrical installations on time, on budget, and as safely as possible—all according to clients’ unique specifications.

John started his career at Forest NY in 1985 as an Apprentice Electrician, spending 11 years in the field as a Foreman and, later, General Foreman. He then joined the company’s office staff, working his way up through Project Manager, Account Executive, and Assistant Superintendent positions before becoming Vice President.

He earned his New York City Master Electrician’s License in 1998 and has been Forest NY’s License Holder since 2006. He is a member of the NYC Electrical Code Revision Committee and the International Association of Electrical Inspectors. He attended Queens College of the City University of New York and the New York State College of Labor Studies.

John and his family live on Long Island, where he enjoys restoring cars and attending his grandsons’ sporting events.